"You CAN Do It"
The Antigonish Movement 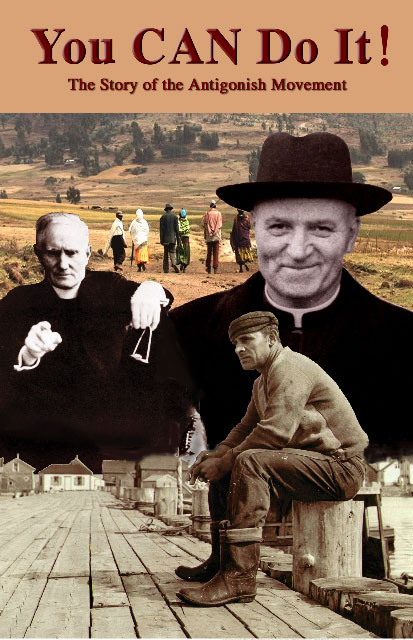 YOU CAN DO IT! Life for fishermen, farmers and industrial workers in the Nova Scotia in the 1920's was bleak. The rise of unrestricted capitalism had marginalized them and laws that favored property over people had drained them of hope for a better life. Many voices were raised demanding action, but few had any real impact.

Rev. J.J. Tompkins was a voice of a different sort. As a Roman Catholic priest and the Vice President of St. Francis Xavier University in Antigonish he had the status that could demand to be heard. He argued that the answer to the peoples' problems lay with the people and that the way to unlock this potential was through education and co-operative work. His persistent and strident demands that the University change its operation angered many in power and he was exiled to the remote, impoverished parish of Canso.

The impact of that move was far greater than anyone could have imagined. His influence revolutionized the people and set the stage for the dynamic Dr. Moses Coady. These two men together with an extraordinary team of men and women created a movement that transformed the maritimes — the Antigonish Movement.

"All these people came together and actually brought about something on the face of the earth that didn't exist before and that's a bit of inspiration and genius... and it's a genius they all shared."
Dr. Dan MacInnis

You CAN Do It! tells the incredible story of The Antigonish Movement, its beginnings, its early successes and its enduring legacy. Through the use of archival film and inspirational contemporary stories of international development, this documentary introduces the viewer to the reality of life in rural Nova Scotia and New Brunswick in the 1920's and 1930's and with contemporary life in rural Ethiopia. The similarities are striking. People on the margins of society face the same problems regardless of time, location, culture or political system.

The story of the Antigonish Movement is a story about people, farmers, fishermen, industrial workers and their families. People who were hungry, who lacked the means of securing a decent place to live and a good education for their children. The Antigonish Movement is also a story of Dr. Hugh MacPherson, Rev. J.J. Tompkins and Dr. M.M. Coady, and about the Sisters of St. Martha and the team of people who created the St. Francis Xavier Extension Department.